I hate being bored, don’t you? In the back of my head, I can hear the echoes of the phrase ‘only boring people get bored!’ Well. Sometimes interesting people need a break from all of their exhausting and creative pursuits, and would rather like a bit of time off. Sometimes, the most fascinating creatures among us get stuck in the house, due to…oh, I don’t know. Snow?

And so it was yesterday. Trapped in the house! I elected to start a roaring log fire, put the original St Trinian’s on, and try and loll about a bit. I haven’t been used to taking weekends off lately, so I find that my brain is still running and my hands are fidgeting, and I generally want to do something. A lot of the time, I find it easier to relax by doing something that isn’t related to my work, or is utterly pointless but thoroughly enjoyable. For a start, I decided I’d wake myself up by going out into the snow with bare feet. I’ve never done that before in my life, and I’m not sure why I did yesterday. A combination of supreme boredom caused by the endless similar ‘snowy scene’ photos that appeared all over the net, and the fact that it was going to take me ages to get socks and shoes on. Anyway, I highly recommend it, and here’s the proof I did it: 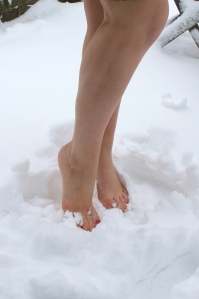 I saw the comedian Josie Long do a brilliant stand-up show a few years ago, where she talked about all the things people put a huge amount of effort in to, but which don’t actually make any difference to life whatsoever. The show was called ‘Trying is Good’, and Josie pulled together a bunch of examples of the aforementioned ‘tiny things’ that people devote their time to. She handed out little hand-drawn booklets to all of the audience, and later in the show she passed around sweets and oranges for people who were particularly lovely. I was charmed by the show – she also mentioned how at the Edinburgh Festival, she would make badges for all the audience members on a daily basis, as well as sticking packs of sweets to the bottom of chairs as a nice little surprise. One of my tutors at uni, who’d been working at Edinburgh that year, told us that Josie held a month long Boggle championship over the course of the festival, challenging everyone to games between shows.

I unashamedly love that sort of thing. We get so caught up in only doing things that are important and that will drive us forwards in life, that we rarely ever spend time on something silly and purely for enjoyment purposes. Well, I’m a big fan of doing little thing just for the sake of it. That’s why I bought myself a 24 pack of Sharpie pens, despite having no practical use for them whatsoever. One of my February challenges was to make a stop motion animation, and I decided yesterday would be perfect to give it a shot. I’ve never done anything like that in my life before, and it was a big process of trial and error. For my ‘final’ piece, I shot about 200 frames, editing it together using the amazing free JellyCam software, and the result is below. It’s so far from perfect, or even being any good, but it was my first time! And I’m going to try some more (better) stuff in future. Hope you enjoy!