It’s the Monday after my first London Fashion Week, and I. Am. Shattered. What an absolutely incredible few days, though. I had no idea whatsoever about what to expect, but it was an unbelievable experience. Every day was absolutely rammed, going from show to show, stalking around on vertiginous heels, eating weird things at odd times, drinking bubbly sporadically throughout the day…There’s such a buzz all around London, this sort of surging energy that pulls you in.

I loved just standing in the Somerset House courtyard, in the sunshine (and rain), watching. I liked the kind of meta-voyeurism of watching people being watched. I liked the way the photographers moved like a shoal of fish, changing direction as some new important person walked into the arena. Before shows started, there would be a kind of stillness, a quietness. It felt a bit muffled, like when it snows. And then suddenly a spark would ignite somewhere, a sudden static energy rippling through the crowds, breaking the spell. 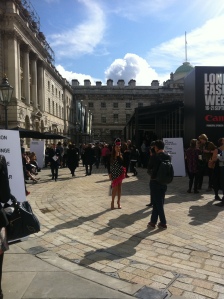 I didn’t think I was going to care about what I wore. I didn’t plan ahead, only for the first day, and that was only by lucky chance that I picked up something new to wear. Everything I’d read prior to attending said ‘don’t even worry – no one will be looking at you’. This is absolute RUBBISH. People look. The general public look at you as you leave the station and walk down The Strand. As you approach Somerset House, other LFW-attendees give you the look up and down. It’s just automatic, it doesn’t mark you out as special, it’s just an involuntary thing that most people in fashion do. A very quick sweep, feet up to hat. 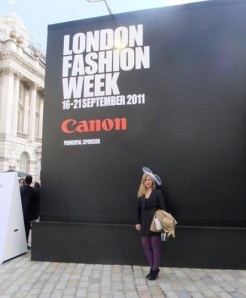 With street style blogs and websites springing up everywhere, photographers are not simply there to snap a covert pic of Anna Wintour, or any of the other Frow-ers. I was surprised, when I first entered Somerset House, to feel someone grab my arm and ask if they could take a picture of me. It happened again subsequently, and it’s surprising how quickly you get used to holding a conversation, quickly turning to be snapped, then returning to the chat again. Also, once one photographer hauls you out to take a picture of you, others will follow suit. I’m not saying I was wearing anything particularly bizarre, fabulous, or attention grabbing – and I’m still convinced I’m going to spot myself on some blog under the title ‘What were they thinking? The worst of LFW’, but still. It was very flattering.

By Saturday night, my head was pounding. As we’d been at a lot of the up-and-coming, ‘one to watch’ shows, we were getting front row seats. You stare at a blindingly white catwalk, feel this pounding bass that seems to hit right into you, you smell a myriad of heavy, cloying perfumes. You drink fruity, sweet bubbly. The flash and click of cameras is endless. The heat of lights and bodies combine. It’s hypnotic and overwhelming.

What else, then? Well, Sunday morning we attended the British Fashion Council-hosted Estethica brunch. Estethica is a sort of collective, I suppose, formed of various ethical designers and trying to raise awareness of the impact of climate change on the planet. We grabbed bucks fizz and Bloody Marys, and sauntered around. I’ll do a write up on this properly soon, as some of the things we saw were absolutely mindblowing (dresses made from yak nipples, anyone?)

I have a huge thank you to make to Rachel Montague-Ebbs, who made the whole thing possible for me. I’ll be helping her with LFW coverage for her website, www.LadyMPresents.co.uk, as well as writing various ramblings in future. I never thought I’d get to attend such an amazing event, specially not this early in my writing ‘career’, and I’ll be eternally grateful for everything I’ve been given. Thank you so much, Rachel.

Sorry it’s all been a bit more serious and fashion related recently, chaps. There’ll be some chirpier bits to come, promise.