I’m sitting here, facing a blank page, as Saturday morning dribbles away into Saturday afternoon, just me and my blog. Part of the reason I’ve made endless excuses and avoided the world of hyperspace is that I felt the pressure of writing something GOOD. I’ve had so many lovely and encouraging comments about my writing, and this blog, that I didn’t want to jot down anything half-hearted. But, being afraid of not being good doth not a writer make (as any Guardian journalist will tell you….oh yes I did.) Often, writing is about is just about consistency, of just sitting down and blocking something out.

So, in an attempt to get up to date, I’m going to have to do a bit of Doctor Who worthy time travelling. Let’s start with April, shall we?

Someday my prince will come…

Since my birthday in January, I’ve developed a taste for hostessing. As a result of this, I promised (threatened) to hold a Royal Wedding party. And just as well – I got a bit fed up of all the wedding-bashing that led up to the event itself. While I may find sarcasm funny, cynicism isn’t really a word in my vocabulary. Thus it was that, on the morning of the 29th April, a gaggle of friends descended on my house – some so early that they caught me with my rollers in…oops!

We were terrifically lucky with the weather. After a rainy week, we were able to take the party outside. I’ve never done anything like that before, and it was pretty marv – we provided our own commentaries for the ceremony, my friend Colin played The Sex Pistols over the Beeb’s coverage; my friend Laura followed the entire thing on Twitter and stood up for Jerusalem, and we almost all got terrifically drunk on my Earl Grey infused vodka.

Foodwise I had a lot of help from friends with this one, but for my part, I made Nigella’s chocolate and lime cake with margarita cream, my usual raspberry meringues (ooh err), various puff pastry bits, a strawberries and cream cake, and finally a lustre dusted mini-wedding cake. I find cake decorating an exhilarating activity, because I never plan. I just start icing and frosting and glittering and cutting and carving and pasting….and at least five times, I say to myself ‘it looks bloody atrocious’. Most of my cakes, in fact, end up looking the way they do because I’ve had to endlessly correct what I’ve just messed up.
This one was scary territory. There’s little room for failure when you’re working with ultra thin white Royal Icing, and I did a fair amount of Frankensteining on it. Inside was lemon curd and fresh strawberries, and outside I added gold lustre dust, butterflies, little gold hearts….I don’t think it turned out too hideously.

The biggest cause for concern was not just the lack of bunting – I never believed I’d see the day when every shop I went to in Tunbridge Wells sorrowfully informed me ‘I’m afraid we’re all out of the stuff’ – but what I was going to wear. After my birthday party dress, which belonged more on a cake stand than on me if we judge it on the meringue-o-meter, I had a reputation to live up to. A reputation for ridiculousness, that is. I scoured the length and breadth of the country (well, Oxford Street), and came up with nothing. I’ll touch on this more later, but the high street is rapidly becoming a no-go area for me. I’m thoroughly sick of cheap fabrics, shoddy workmanship, and garments that have the longevity of a doily in a snowstorm. I’ll be blogging about this particular issue soon enough, but let’s just leave it there for now, because I start getting angry. Before I get my stiletto heels out… 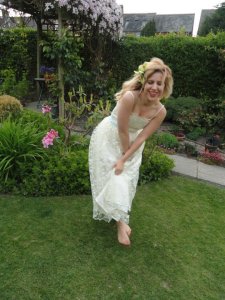 So there I was, tainted with the garb of Topshop, the reek of Urban Outfitters, the grasp of French Connection; smack bang in the middle of a sartorial/existential crisis, and then I found it. Like an oasis in a desert, like Root Boost to a flat haired girl, like…well, Wills to Kate…Love Is Boutique. This little haven of vintage/hardly worn had been tucked away on Church Road in Tunbridge Wells for a fair amount of time, and yet I’d neglected it, like a….ok, enough of dodgy analogies, I promise. Again, this will be fodder for a more ephemeral blog in the near future, but for now let me just say – I spotted it, in the window. It was just below calf length, a vision in lace, nipped in by a silky sash…and the minute our eyes met (eyes and hooks, in the case of the dress), it was true love.
Reader, in all the years of going to Topshop, I had NEVER felt like this about a dress.
So, togged up and with tea infused vodka in one hand, the party got underway. The ceremony was lovely, Kate’s dress was beautiful – but gosh, didn’t Pippa look ever so slightly better – Jerusalem was rousing (wasn’t it, Laura), and bunting or not bunting, I had a bloody marvellous time. 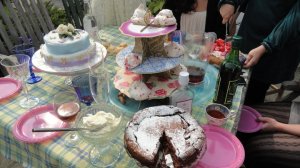