Just what it says on the tin, really! Since the year started, I’ve been working certain parts of my body off on various projects. I haven’t really taken a weekend in ages, and despite my various bits of midweek indulgence, it’s been rather oppressive at times. Still, as a freelancer, I really shouldn’t be complaining about too much work! Anyway, I worked ultra hard to get things finished last week, as I’d booked in a weekend in Oxford with my lovely friend Lucy (might do a photo post later in the week). At precisely 1am on Friday night, I finished my work.

I’ve found that the freelance lifestyle has little lulls every now and then, while one is waiting on projects to be approved or sent back. This week is one of those blissful little lulls, so I decided to concentrate on some of my own projects, the things that I keep shoving aside for a time when I’m ‘less busy’. Today, I’ve been drawing for most of the time, I had a three course lunch, brushed up on some Bach on the piano, and generally had a rather lovely time. Here are some of my scribbles from today – I was playing around with Sharpies and watercolours to test different effects, hence why a couple of the drawings are dupes! 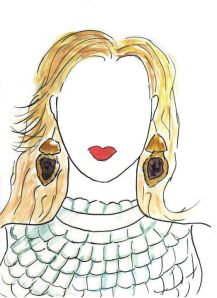