So here’s the first instalment of my Vogue Secret Address Book Challenge! The original brief is poking round on the site somewhere, but I’m essentially taking on Vogue’s Secret Address Book, letter by letter, and engaging with/going to/doing at least one thing from each section. I’m starting with A (obviously!), and this is my first challenge, Apps. Vogue reviewed a selection of apps, so I selected three of them and explored them myself. So without further ado, bring on the apps!

So, what is it? Oh, this could have been so ace. I was on the road to giving it a rather good rating, but unfortunately due to a glaringly bad feature, I can’t recommend this to anyone. Put simply, ‘Fancy’ is a spectacularly frivolous app where you click on various user-submitted photos, to ‘Fancy’ them. Fancy is a brilliant word, so I was already partially sold on the idea, and even though it was deeply vacuous (if you’ll excuse the oxymoron), I very much enjoyed it. Having had a rather draining day on Tuesday – read my ‘Endings’ post to know why – I was deliriously happy just clicking on silly pictures of planets made out of chocolate, and baby polar bears, and Prada shoes, and all sorts of ridonculous but good things.

The Good: If you’re halfway through War and Peace and you need to give that brain a break, there is something strangely compelling in just immersing yourself in a world far removed from things like news headlines and reality TV. You can create your own sort of ‘bubble’, filled with lovely things. Ok, it’s not going to win a Nobel Prize, but it’s fairly satisfying.

The Bad: I’d already started constructing a positive review in my head as I shut down the app and logged onto Facebook. My jaw dropped open. What the hell were all these posts allegedly from ME, telling people that they, too, might ‘Fancy’ the things that I’d liked? I kid you not, there were about 23 posts apparently put up by ‘me’, featuring a little picture of the thing I’d liked, and making me look like an insane toddler. My friends think I’m sitting at home reading novels and being all cerebral, ok, stupid app! Now they know the ghastly truth – that I’ve been loafing around in bed ‘Fancying’ puppies! It happened because I logged in with Facebook, so my fault, but there’s no way you can turn that feature off.

Oh, and that’s another thing. There is something very uneasy-making about looking at a photo of a bird or a cat and clicking ‘Fancy’. You have to try it to understand.

The Bottom Line: I was going to give this app a good score, until it made me look like an utter twat in front of my Facebook friends and ruined my intellectual cred. Now the world has seen me for what I truly am – a tiny step up from the ‘I just really, really love cats’ YouTube girl.

So, what is it? Essentially, an app that creates a little iPhone sized magazine for you. It’s a magazine that you yourself curate – and by curate, I mean you just jab your finger at things you like the look of. You choose from a selection of online publications, and I opted for everything from Glamour to some random blogs.

The Good: You get to gather together a whole host of ‘stories’ from across the net, to make sure you’re getting things that interest you personally. It’s engaging, and you could spend hours ploughing through old stories and posts from your sources. There’s a mine of information that you can collect together in one place, so if you often find yourself trawling all over the net for different stories or articles, you could save a lot of time. It’s nicely laid out and fairly easy to navigate, and the most satisfying thing is the ‘flipping’ action you make as you turn to the next story. 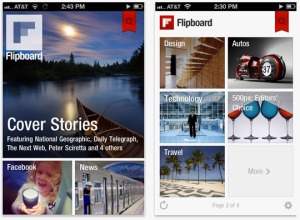 The Bad: It’s pretty much US-oriented, so not a great deal of content that is necessarily relevant to us UK-dwellers. I think on an iPad it would be glorious, but on the iPhone, it’s all a bit overwhelming and you have to keep readjusting the size of the screen to different stories. The other thing I disliked, but which is insurmountable for obvious reasons, is the fact that it has to connect to the net to load the stories. If you haven’t got amazing signal, it gets very frustrating very quickly, and also makes me think I can hear it eating up my data allowance.

The Bottom Line: Enjoyable enough, and lead me to discovering a couple of great new blogs, but ultimately not something I’d probably look at on a regular basis. There’s almost too much to see, and ploughing through all the stories seems like more of a chore than a pleasure.

So, what is it? It’s a very user-friendly star charting app, whereby you just open the app up, point it in a direction and see what’s up there. You can find where planets are, the names of the constellations and where they are, and you can find out what’s exactly above your house!

The Good: I’ve long since been interested in astronomy, and I used to dream of getting a proper telescope. But I also haven’t been blessed with endless amounts of patience, so I think I might have struggled to really map the stars and work out what they all are. Go Skywatch resolves this by actually overlaying an image of the constellation across the line of the stars so you can work out why exactly that random group of lights is called a bear, or scales, or a hunter. It’s just so inordinately pleasing as a piece of technology that you’ll be thrilled to use it.

In my opinion, this is exactly the kind of thing that makes an iPhone an outstanding development in the world of technology. You can keep flinging pigs at some birds, but I’m going to stick with innovations like this (and maybe the odd cute puppy, ahem hem). It’s a pleasure to use, extremely easy to understand and get started with, and you can put in as much as you like. If you want to make your own star maps on paper, you could.

The Bad: I have very little criticism to offer. I balked at the price, because I’m pathetic, but really? £2.49 is a bargain for this app. The only thing I would say is that perhaps it makes it too easy. You don’t need to work at finding out what things are, it just says them. But that’s really my only concern.

The Bottom Line: I think you should go and download this app straight away. It’s tremendously exciting and absolutely beautiful.