I’ve been terribly quiet lately, and I thought it was finally time to explain why. A couple of weeks ago, I was appointed Beauty Editor for a new glossy magazine called Sussex Style. I won’t bombard you with info on it as most of you will have already heard about it, and I don’t want to be a walking, talking ad, so I’ll just say that it’s going to be high end, aesthetically driven, stocked all around the South East, and ultimately something that this county needs!

Anyway, with my deadline looming large like a…large loomy thing, I had to set to work quickly. I’d decided that I wanted to aim high with my beauty pages. Instead of featuring products alone, I chose to create an actual beauty editorial. Now, this was one of those cases where I’d blindly opted to do something without actually knowing whether or not it was feasible, but I’d set my bar and I was determined to reach it.

I soon realised just what I’d let myself in for. First, there were the creative decisions to be made: what kind of looks was I going to go for? I began to compile moodboards, both in real life and on the dreaded Pinterest (I continue to be the only girl in the world who despises the wretched thing). That was the easy bit. Next, I had to assemble a team to help me get my ideas from the ol’ noggin to the page. I have to thank the Twitter community here, because it just wouldn’t have been possible without them. Within a few hours of tweeting I was overwhelmed with talented photographers, makeup artists and hairstylists.

Next, I talked to the people who’d been suggested, and we started to work out teams, and dates. I was extremely lucky to snag a makeup artist called Marie-Isabel Kennedy, aka Maz. Not only a ridiculously talented young lady, but she also pulled a team together as she recommended a wonderful photographer called Parisa Walklett, and also an absolutely fantastic hairstylist called Stephanie Hayes. From there, it was all systems go – I put together a brief, we started to arrange dates, and then it was time to cast a model. 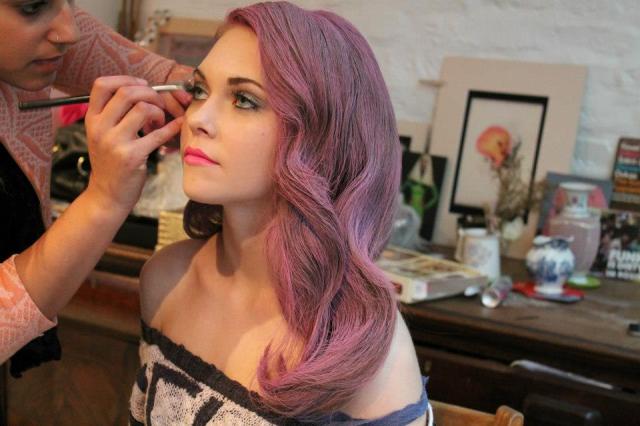 This actually turned out to be the most stressful part of the operation. Up until this point, things had gone alarmingly smoothly – the team had fallen into place, we had Parisa’s studio all sorted out, the looks were signed off on, and jewellery had been sorted (more on that shortly). As we were working on such a tight time scale, it was extremely difficult to sort out a model, so I spent a rather stressful day frantically emailing and phoning all the big agencies, throwing myself on their mercy. Tell you what, it’s no joke when they talk about how young models are; heaps of the girls I requested were at school on the day of the shoot!

On Friday afternoon at 5.25pm, with the shoot on Monday, Select Model Management came up trumps with a gorgeous girl called Hannah Murrell. Hannah had the most perfect face for the shoot, and we were delighted to book her. When the booking was confirmed, I’m not ashamed to say that I leapt out of my chair, punched the air a lot and ran backwards and forwards shouting ‘YES!!! YEEEEES!!!!’ like a fool. Because what good is a crack hair and makeup team, a brilliant photographer and gorgeous jewellery without a model?!

On Monday morning I headed up to London to pick up the jewellery. I was incredibly happy with how lucky we’d been on the jewellery front. I’d put out a twitter call for some high end, quirky pieces, and while I had a good response, nothing quite fitted the bill until I got a tweet from the lovely folks behind Jolita Jewellery. Founded by Algis Abromaitis (the designer) and his sister Jolita (the marketing/press/PR guru), their pieces fit my brief perfectly, and I spent a happy hour browsing their site and pulling options out. Jolita was delightful to deal with and made my job extremely easy, and was hugely accommodating; I’d recommend them strongly to any stylists or anyone putting shoots together.

I picked up my precious cargo from the lovely Jolita, and headed out to Finsbury Park to Paris’ studio, where I met Hannah, Maz, Steph, Paris, and the adorable Henry, a French Bulldog/shih tzu cross. I’ll leave you all to put those two breeds together…We listened to a lot of music, ate a LOT of biscuits, fawned over Henry, drooled over the jewellery, and I got to watch some extremely talented people in action. The whole thing was a dream come true, and I genuinely kept expecting to wake up at any point. 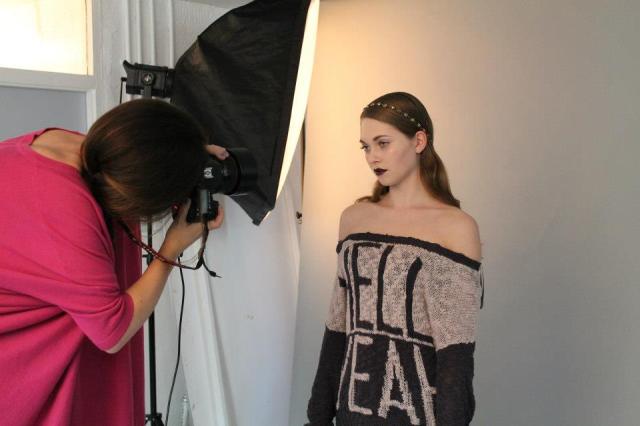 I’d like to take this chance to thank my MD at Sussex Style, Sean, for giving me free rein; my amazing team of Paris, Maz and Steph, the wonderful Jolita Jewellery, the awesome Hannah, and all the tweeters who helped me out on a VERY tight deadline. That photoshoot was one of the best things I’ve ever done, and I feel so proud of it. Not to get all soppy, but the whole thing meant so much to me, and I feel like I’m finally doing the things that I dreamed of doing as a teenager. I still can’t quite believe it’s all happened!

Sussex Style magazine will be coming out in November, and in the meantime hop over to the Facebook page or the Twitter account @SussexStyleMag to keep up to date with the latest news! 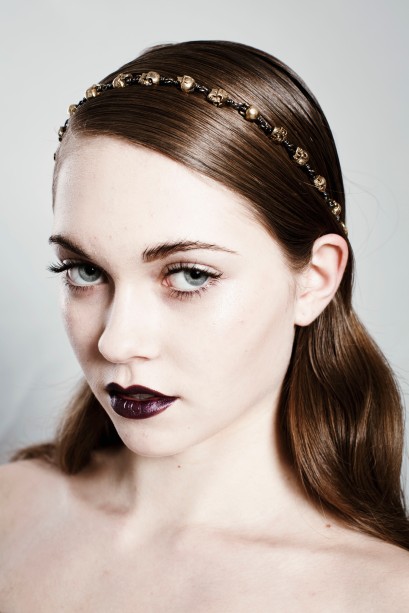 I swear, all my posts this week are just going to come under the broad category of ‘cheering myself up’. I’m still ill, I’m tired, I have a little bit of my voice back but not a lot, and I’ve graduated from Gossip Girl to America’s Next Top Model. I’m unbelievably bored. I was hoping to use today either to do some fun projects or to crack on with the mountain of work I have, and instead I’m just useless, utterly utterly useless.

What can you do when you barely have the energy to walk up the stairs? Well, I decided to paint my nails. I’ve had a bit of a bare nails moment going on for the last few weeks, because I wanted to give my nails a break from the endless parade of colours I’d been abusing them with since Fashion Week. I’d got really bored of uniform nails, and for one week I even had every nail a different colour. I liked the way it looked, but it wasn’t exactly ideal for when I needed to do a quick touch up of my nails on the train. But I fancied doing something a little different today.

Probably my favourite colour combination is blue and gold. If you haven’t picked up on my Marie Antoinette/Versailles obsession yet, I’ll just reiterate it for you once again. I think it’s such a beautiful combination, and I liked the idea of recreating this on my nails. It makes me think of pale Spring skies and shards of sunlight, or the way the Autumn sun shines through leaves, illuminating them. I purchased the Rococo gold leaf lacquer from Space NK in Tunbridge Wells a couple of years ago, and despite an initial phase of wearing it frequently, I’ve kind of left it alone. It’s got formaldehyde in, which smells quite a bit and makes me feel like Damien Hirst. But today I needed serious perking up, and so out it came. I hope you like the results. What’s your favourite nail varnish/colour combination? 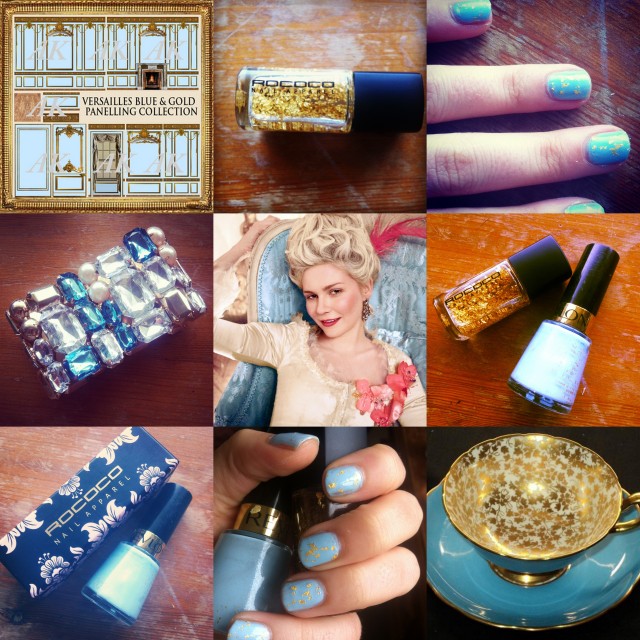