What a cracking day I had last Thursday. I’m a very lucky girl! I got to go along to a special press day for Citroen, in association with Masterchef winner 2011 Tim Anderson and food charity FareShare so I could cover it for http://www.LadyMPresents.co.uk. All I knew in advance was that we’d touch down in Dulwich village, get to go for a spin in the new Citroen DS5, the first hybrid car for the brand, go on a scavenger hunt for ingredients, then watch Tim cook two courses for lunch. I was massively overexcited at the prospect, as Tim was one of my favourite Masterchef contestants, thanks to his innovative approach to food, his love of Japanese culture, and his extremely ace glasses.

Thanks to Southeastern and their appalling service, I was delayed by an hour, but the extremely patient team got me into one of the DS5s, and I was chauffeured around Dulwich Village. Oh, how we foraged for ingredients. When I say foraged, I mean that we parked in a pretty street and I raced into a lovely boutique food shop called Romeo Jones to purloin some milk and luxury coffee. The car is absolutely gorgeous. My family car has always been a Citroen, so I’m used to them, and this new hybrid incarnation is spectacular. It has a ‘cockpit’ inside, a heap of cool looking buttons (technical car terminology there, guys, don’t be intimidated), a built in Sat Nav and reverse parking cam, the driver’s seat has a seat massager, both front seats are heated, and there are four sun roofs, so each passenger can choose their own environment!

Back at the house, I got a chance to mingle with some of the other bloggers and writers, and I met the lovely Coralie of teatimeinwonderland.co.uk, and Peter from aboutmygeneration.com. I was lucky enough to get a perfect seat, right opposite Tim, and I could watch what he was up to. Watch it, sure, but the hopes of me being able to recreate any of the stuff we saw is slim to none. Tim got almost all of us involved in creating the pudding, so a few of us brewed infusions, others created a masterful chocolate ganache, and some poor souls peeled grapes. The infusions I worked on had lapsang souchang, coffee, tobacco, liquorice bark, and peppercorns in. The smell was absolutely phenomenal, and I was intrigued to see tobacco being used. Quite frankly, readers, I lost track of what went into the pud. There were so many different processes all going on at one time, it was nearly impossible to keep up!

Tim used a top notch futuristic blender to prepare grape jelly, and set about creating a foam, and a delicately flavoured cream. Then the really intriguing part started. Tim produced a strange implement with ‘The Smoking Gun’ emblazoned on the side. We all watched, transfixed, as he poured wood chip into the top, and lit it. A haze of smoke began to sputter out, carrying the rich tinge of bonfires, Cornish cottages with smoking chimneys, and childhood campfires with it. The smoke was directed into the little glass pudding pots, before they were sealed with a lid that was ironed on. A chef with an iron? I can dig it.

Once we’d all gasped at and revelled in the extraordinary pudding, Tim then moved on to the main course. I’m a life-long veggie, so I don’t have any kind of reference point for the dish he made, but it smelt delicious. Is it weird that I’m vegetarian but I’m not put off by the smell/look of meat? Meh. Anyway, he accompanied it with some extremely creamy mash with blue cheese, and Romanesco in cashew butter. When I describe it, it sounds quite pedestrian, which isn’t remotely doing it justice. I got to eat mushroom arancini for my savoury course, and it was absolutely heavenly. A world away from the gloopy, solid balls (sorry) you find in Italian restaurants. These were so savoury, packed with blue cheese, mushroom and rice, and packed a big punch of umami. Ooooh mammy.

The pudding was out of this world. I highly recommend that everybody peels back the lid of a jar to be hit by a fragrant, smoky smell, before diving into a rich chocolate ganache. Before we started the puddings, a chap came over with a kettle and said something like ‘sorry, I forgot to water these earlier’, gesturing to a large vase of red roses and eucaplytus in the middle of the table. He poured the kettle into the vase, and we realised he was using one of the red wine infusions from earlier. If you’ve never had a cloud of red wine combined with dry ice engulfing you at the dinner table, then I suggest you remedy that instantly. After lunch, I had that feeling of being at peace with the world that I only get from eating extremely good food, or when I’ve had a rather heady cocktail. 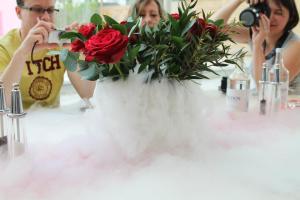 The food was divine and the new Citroen was beautiful. So what now? If you hop along to the Facebook page for ‘Delicious by DS5’, you can like their page. ‘Why should I do that?’ I hear you ask. Well, on Monday, you can apply for seats at the ‘Delicious by DS5’ pop up restaurant near Liverpool Street, London that will be open from 16th-19th May. You won’t pay for your five course dinner, rather you’ll be asked to contribute a small amount to the charity FareShare. FareShare are an incredible food charity who tackle food poverty by tackling food wastage. They take food that supermarkets would have paid to have taken away to landfill (all the food is within sell-by dates and nothing is wrong with it) and give it to over 35,000 people in need across the UK on a daily basis. 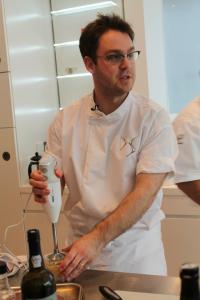