Again, big apologies for not writing on here that much lately. I just haven’t really felt moved to write anything, and I didn’t want to post a load of filler that had no meaning. I’ve been feeling a little….adrift, and not sure of my path. Not in a hugely overdramatic way, but I’ve wound things down workwise, as I’m off on holiday this Friday and needed to clear stuff out of the way. I’m not very good at not being busy. When I don’t have a lot on, I suddenly become very bad at doing the few tasks I do have to perform. You know the thing – ‘Yeah…I could do this today, but…I could also do it tomorrow’. Mañana….

I tend to take on more and more work until I’m almost frantic, which I enjoy – and I’ll just keep going and going, then things will get a bit quieter and I’ll feel all weird, and faff about a lot. I’ll write the same things on my To Do list every day, with no real intention of actually doing them. What I’m trying these days is a different tactic. I’m trying just to set myself ONE goal at a time during the day, then work through it. Because of my self-employed status, I’m involved in a wide variety of different projects, which is lovely, but there are always wildly competing priorities. I’ll sit down to one task only to find my head flooding with a million other things I have to do that are equally as urgent.

So now, I’m trying to approach one thing at a time, work through it, feel happy that it’s completed, tick it off the To Do list (compulsory step, do not skip) and then move on to the next. Days like these, I feel like I did when I was studying for my GCSEs, and I spent hours making a beautifully colour-coded timetable, and a lot less time on actually working. I can be a huge procrastinator, but with so many projects on, this actually sometimes works to my advantage. Sure, I didn’t manage to set up my online Etsy shop today, but I did write three articles, clear out my shoe collection, get some photography done, and work on a music mix. The art is in making sure the tasks I do to procrastinate are actually of some worth.

But I’ve been stuck in a rut of late, and not getting nearly as much done as I’d like. It’s like my energy has diminished. I feel like a computer game character; I can practically hear that beeping as the life force drains down. What to do? How do I get myself out of it? It’s hard to explain what it even is. I wake up and approach the day with the best of intentions, sit down to do stuff, and I just…can’t do it. It’s not difficult, but I can’t seem to get on with it, no matter how many times I ‘have a word with myself’. It’s really very irritating.

There’s one fail-safe way that works to get me back into the right frame of mind. Maybe you do it to? Essentially, I need to have a huge clear out. Getting rid of stuff and tidying up my environment is the only way I’ve found that’s guaranteed to clear my head. Luckily, with a little more time on my hands for the week, I can get stuck in. So here are some photos of my room/shoe collection, during the clear out phase. Check back in the week for the finished result (hopefully!) My shoes were particularly shocking, because I only tend to wear about three or four pairs on rotation. I didn’t realise I had over 80. I know it could be worse, but for someone who claims that I’m not really interested in shoes…well, it was pretty appalling. The local charity shops will be more or less covered in my stuff. Let the clear out commence! 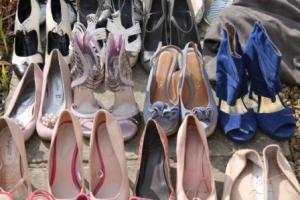 3 thoughts on “Clear Out”