On Tuesday night, I whipped myself off back to the metropolis for a talk at the V&A, named, rather ominously, ‘Dead wood: The Future of Magazines’. There were four speakers: Lucy Scott and Tina Smith of ‘Lost in London‘ magazine, Steve Watson of Stack Magazines, and Alan Rutter, journalist, writer and web entrepreneur.

Due to the name of the event, I wasn’t entirely sure what to expect. I care passionately about the fate of magazines, not just because I’m hoping my future career will involve a healthy dose of magazine writing, but also because I adore reading them. I don’t think reading on my iPhone, laptop, or on a tablet could ever replace that feeling of a physical object, an object with a distinct texture and smell…I love to engage fully with my magazines. I fold pages over, draw on them, often rip things out to plaster on my walls, or for inspiration when I’m designing.

Reading a digital publication inspires no joy whatsoever in me. I struggle to read, I get distracted, I click off and back onto Facebook…It just simply doesn’t work for me. Those are my opinions, the opinions of a long term magazine reader, but not someone who has had a great deal of direct contact with the industry. I was intrigued to hear what the various speakers would have to say on the subject, so without further ado, I’ll tell you a little bit about what I learnt:

These two lovely ladies have founded their own quarterly magazine called ‘Lost in London’. The ethos is delightful: a beautifully curated magazine created for those who are looking for a little bit of pastoral charm in our teeming metropolis. I grew up both in Sussex and Surrey (well, Ascot in Berkshire, but…you know) and have always been surrounded by nature, parks, and general loveliness. When I look back on my childhood, I genuinely see fields of long grass at dusk, doing maths homework and playing football on the huge lawns outside my old house, ‘nature expeditions’ during school days, Natural Trust properties, cream teas…Even while I was at uni, I rediscovered a love of exploring nature and climbing trees. 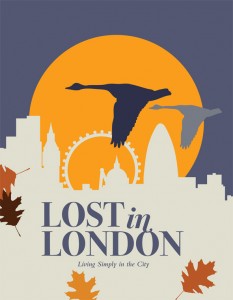 I’d always wondered how to align my love of the countryside with my adoration of London. ‘Lost in London’ features photos and text centred on ‘portraying the city’s hidden charms and rustic character, as London based artists provide a visual response to the city.’ A wonderful idea, and well-executed. So that was the publication, but what did the co-producers have to say about the future of magazines, and their experience in the industry?

Obviously, we’re talking about independent magazines here. The general consensus is that, say, ‘Vogue’ will be around millions of years in the future. But what about the creative, artistic, advertising-free smaller magazines? Tina and Lucy started off working at Property Week, and found that their ideas on what made a good magazine meshed. To cut a medium-sized story short, they launched ‘Lost in London’. They told us that when they launched, they didn’t view it as a business, or anything that would make them money. They decided to stay true to their creative ideals, eschew any advertising, and keep it purely their magazine.

Tina and Lucy were realistic about the implications of this. The magazine industry is more or less run on advertising (yesterday I almost put my back out trying to lift up the March edition of Vogue…embarrassing), so I love the fact that many of these small publications are avoiding the mighty hammer of advertising and carving out their own way. Of course, financially, this makes the difference between a profitable magazine and a piece of art. Tina and Lucy commented that they ‘just about broke even’ on their project.

Not ideal if you’re looking to make your new publication your primary career – Tina and Lucy both work other jobs, ploughing all of their spare time into ‘Lost in London’, but they’ve created something they can truly be proud of. They have not compromised on any part of their project. Everything contained inside is real, true, and beautiful, and I believe they have achieved what they set out to do.

Steve is something of a magazine maverick. He has founded ‘Stack’, a magazine subscription service which implements a ‘lucky dip’ mentality, meaning you get an absolutely corking independent magazine sent to your door every month. In the first few minutes of his talk, I’d scribbled down some fantastic sounding titles, which on further Googling, have very much, erm, tickled my fancy. Steve was strongly of the belief that print is NOT dead.

He lamented the fact that it’s extremely difficult to locate independent magazines – especially since Borders closed down. Incidentally, I actually read this week that Paperchase are due to start stocking indie titles, which is VERY exciting news. Steve also stated that he believed money can be made from magazines. Like the ‘Lost in London’ creators, he also commented on the fact that the idea is the key thing. Settle on a good concept, because ultimately this will keep you going. The idea is what people will latch on to, and will make them subscribe.

Steve explained how print media should be about providing what digital media simply can’t do. He exemplified this through talking about ‘Delayed Gratification’ magazine, where the last three months of news are reviewed, using a combination of interviews with those involved, and the oh so ubiquitous infographics. He also mentioned ‘Address’, which looks set to be my new favourite magazine, featuring a more ‘academic’ look at fashion. Steve liked the idea of someone thinking ‘I can’t possibly be in a world where this thing doesn’t exist’.

Steve recently worked on a project called ‘The Good Times’ for The Church of London, which involved pulling together an utterly optimistic newspaper and distributing it on the day that “experts” (not actual experts) had decreed as “the most depressing day of the year”. Coincidentally, that was my birthday, so I’m glad someone was doing something positive. I strongly recommend you get yourself a subscription to Stack: http://www.stackmagazines.com/, and also watch the video below:

Last up was Alan Rutter, journalist, start-up founder and digital consultant. He has recently worked at Condé Nast as iPad projects manager, so was obviously coming at the topic from a different angle. (That being said, all speakers did value the power of digital!) He discussed the important things to consider in terms of making a magazine tablet friendly: a certain degree of interactivity, combinations of image and text, and making it readable offline – after all, many readers will have their tablets fired up on the tube.

Alan described a magazine as ‘a curated collection of stories’, as opposed to being a tangible object. For this reason, he believed that a digital incarnation of a magazine was of equal artistic merit, as long as it was carefully designed. He commented that books and magazines are finite, but the web is not. Interestingly, he also discussed how a magazine is an ‘object’, and yet, when you read a magazine on a tablet, the tablet becomes the object.

Alan also talked about financial matters, and how producing a digital publication might not necessarily mean costs were lower. For example, you might need to pay for good content, and Apple will take 30% if you run it through them. Equally, there are the issues of huge competition, and discoverability. Alan recommended learning HTML5, if you’re a developer, as this will ensure your digital publication can work across any screen.

Ultimately, he commented ‘People do want something finite, that’s been curated for them’, and he believes print and digital should be able to sit side by side. Visit Alan’s site here: http://www.alanrutter.com/

Days on from the talk, and I’m still turning it over in my head. I hadn’t been expecting more of a discussion on integrity and the nature of art – I just thought we were going to be told that magazines were dying – dead, even, and that we should all forget about the dream of working on one. Instead, it was a celebration of the independent magazine ideal. From that one evening, I now have a long list of new magazines to read, and renewed hope for the future.

I learnt so much in those two hours than I’m still processing it. It isn’t just the wonderful revelation that there are still print-junkies out there, but also the idea of a world where adverts don’t form 60-70% of publications (it’s probably more, actually). A world where a group of people created a positive news only newspaper and circulated it on “the most depressing day of the year”. A world where Londoners go around seeking the rustic parts of the city, and taking beautifully judged photos…to say I’m inspired is an understatement. My poor little exhausted and increasingly cynical heart had become very heavy, and that weight is lifting, thanks to the wonderful speakers, and the V&A.

So, in the meantime, let’s all go and read an independent magazine, shall we? How about subscribing to Stack? Put down that mainstream magazine you’re clutching, just for a month, and try something new. Go and sniff a magazine. Get a paper cut. And above all, don’t give up hope.