Or, where did it all go wrong? 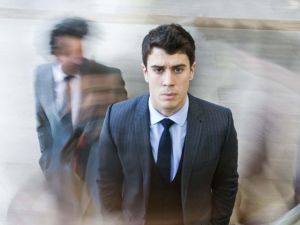 Even when I read the synopsis for each episode of Black Mirror, the third instalment was the one which grabbed me the least. I’ve got no idea why, but I thought it sounded a little flat, and a little predictable. In fact, I even read a book for children when I was about 10, which centred around the idea of a girl who could fast forward and rewind time. Readers, I should have saved myself an hour and got that book out from the library. Black Mirror: The Entire History of You (TEHOY, you know the drill by now. TEHOY, mateys! Avast, there be a terrible plot! Etc etc) revolved around the premise of a world where we can review our lives by flashing back to moments and replaying them. Over and over. And over.

Think of how much time we spend dissecting our lives already. I must have clocked up hours sitting down with friends and furiously muttering things like: ‘so, when he said that, do you think that meant he liked me?’ My well meaning friend would reply: ‘well, how exactly did he say it? Did he say, “see you soon”, or “see you soon”?’ Instead of putting on a gruff voice and imitating whatever my passing fancy had said, in TEHOY world, I’d just replay the scene for her. By the way, I’m not actually that neurotic – I was just illustrating a point. Of all the various premises of Black Mirror, this wasn’t particularly interesting, and was also very poorly executed. I didn’t even fancy anyone this week.

I’ll start with the characters. Our main man Liam (Toby Kebbell) is a lawyer who becomes increasingly suspicious of his wife (I think they were married, I really, really failed to absorb much info) having an affair with a ‘prick’ called Jonah. Jonas? A Jonas Brother? Judas? I finished watching the thing ten minutes ago and I already can’t remember. Maybe there is something to be said for ‘Grain’ technology, where I could just rewind back to the…oh, right. Yeah, 4oD.

I’m not going to bore you with plot details, because it was essentially a middle class version of Eastenders. I imagine. I’ve actually never seen Eastenders. I’m too middle class. Liam obsesses over the events of a dinner party where his wife/partner/girlfriend/who cares is reunited again with Jonah/Jonas/Jesus. For the entire agonising hour of the drama, he just plays and replays events using the Grain implanted behind his ear, analysing things. I’m going to say right here that WATCHING THE SAME THINGS AGAIN AND AGAIN IS RIDICULOUSLY BORING. We got the picture within seconds, we’re not idiots. We knew he could rewind and replay bits. We had no need of seeing each one of those bits again and again.

That was my first issue: that I was bored senseless. The second issue was that everybody was hugely unlikeable. Main man Liam was an absolute arse. Black Mirror worked in weeks 1 and 2 because I liked and/or sympathised with PM Michael Callow and Bing, respectively. But this guy? Please. I’m not sure if it was the writing or the acting, but I didn’t care a jot what happened to him. That’s another thing: you’ll be able to predict the end after about fifteen minutes in. His ‘life partner’, Ffion, was unsympathetic too, and….oh, I just disliked them all. I wish I could review the programme properly, but it was just terrible. Also, Stephen Mangan should have played the lead role.

Jesse Armstrong wrote the script, and I was surprised to find not even the merest hint of humour. After all, this is the co-creator of Peepshow and Fresh Meat we’re talking about. Nothing. I suppose it was slightly like an episode of Peepshow if Peepshow had been written by somebody bloated on a diet of Eastenders and misery, and if the actors in Peepshow had been plucked from some wanky, self-involved student production. I expected more from Jodie Whittaker, who is usually a very good actress. The single vestige of Peepshow that remained was those weird POV shots when one of the boys kisses someone. Even that failed to make me laugh. Oh! I just feel so irrevocably miserable about the whole thing.

Essentially, if you took away the technology, this would be a really crap version of Othello, or He Knew He Was Right. Jealous people will always be jealous, and you can still wreck a relationship without a PVR in your head. The other episodes looked at how technology was ruling and destroying our lives, but this hugely missed the point. Actually, I still remember seeing one of my friends playing and replaying a video on Facebook of a recent ex, sure that she’d seen him with an arm around someone. I don’t know whether that example illustrates the point of TEHOY, or does the opposite. Like I said, I’m feeling far too uninspired by the episode to bother making links. This is a terrible review for a programme that I can’t even really rip to shreds properly.

It felt to me like the episodes got smaller in scope. Week one was about Britain as a whole, week two was about one section of society, and week three was about a small group of people. Rubbish, boring, annoying people. I also think it declined in quality. I was disturbed by the first two programmes, but the final episode did nothing for me. Hence the one part review, which is unheard of for me. I can write 2000+ words on anything, but not this. It was poor, badly acted, unfunny, uninteresting, and there was nobody having sex with a pig. All in all, very disappointing. Should this kind of technology come in, you can rest assured I’ll be deleting this particular episode of Black Mirror from my brainbox.

God, I miss you. Please come back.

2 thoughts on “Black Mirror: The Entire History of You”