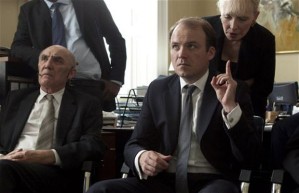 Well. Who watched it? By the looks of my Twitter and Facebook pages, not that many of you, actually – at least not many people I know. My timelines have been clogged with X Factor and Strictly all evening, but I only spotted a handful of references to this. I set my recorder, and that’s what I’m doing now, sitting down at 11.30pm watching it. In a manner Mr Brooker would be proud to lampoon, I decided to do a kind of post action ‘live’ blog. A contradiction in terms and utterly pointless, but I’m just going to go through and list some of my reactions as I watch it. So here goes.

About half an hour prior to watching: I’d read the synopsis, which said about a ‘beloved Princess’ being kidnapped, and the PM having to make a ‘difficult decision’. Turns out that was an understatement. I find out before watching what the particular ‘difficult decision’ will involve: the PM having sex with a pig on national TV. Oh, good. Fantastic. The chance of my dinner making a surprise guest reappearance becomes a very real possibility. But…I’m committed now. Let’s do this.

00.03 The actor playing the PM has obviously been cast to remind us gently but hideously of David Cameron, but the actress playing his wife is unbearably similar to SamCam. I’m already dying a bit inside.

00.04 Ok, here we go, the money shot – so to speak. We’ve got a bleary eyed Princess (not the Kate Middleton-alike I was expecting) having a nervous breakdown and doing a third rate Keira Knightley impression, pleading with the PM to save her life…..by having sex with a pig. On national TV.

It’s insane, and grotesque. And…I’m definitely reaching for the remote to turn off.  I’m not even doing that ‘car crash TV’ thing I so often do with X Factor. I can actually barely hear what the actress is saying, so I’m quite glad I found out in advance what the demands were. Because I’d probably have spent the next half hour going ‘I must be really perverted, because I’m convinced they’re implying he’s got to have sex with a pig’. Anyway.

What stops me clicking off is a little touch of humour. The PM’s advisors are standing solemnly around him, drenched in blue light. The PM furrows his brow: ‘they want me to have sex with a pig?’ The reply comes: ‘Live, on television, this afternoon’. I can’t help it, I giggle. Ok. Come on stomach, you and me can do this thing.

00.09 Brilliant: ‘This video came from Youtube’. We all know how fast a video can travel in 9 minutes on Youtube. Obviously, the genius thing about this is the fact that Brooker’s setting this in the way it would happen. The abject horror of the PM followed by smacking into the practicalities of it.

00.13 We’re back after the ad break – a blonde girl is lying on a bed with her boyfriend, telling him that ‘Princess Suzanne has been kidnapped’. And this is it, this is where I’m now hooked, because obviously this would be most of us. Alarmed, convinced it’s a ‘piss take’, then bemused as to why it’s not on the news but has spread across all forms of social media. I actually remember this with the riots – sitting up late at night, checking Twitter as parts of London were burning to the ground, and yet the news was frozen, stuck in a place that the social networks had long since moved on from. I remember finding it curious that I stopped relying on the official news channels to tell me what was happening! That I was relying on my friends and acquaintances instead.

00.14 We’re in a newsroom, a team discussing whether they can run the story, and if so, how. The issue is raised as to why Facebook is providing solid coverage, but not the official news. They’re running it.

I like the fact that Brooker got the pig sex thing out of the way in first minute (I assume – still convinced I couldn’t hear a word that actress was saying). It means we’ve sort of put that to one side of our brains, it’s still there, but we’re able to focus on everything else: how the story’s being covered, what the advisors are doing etc…

I hate crude dialogue in most things. I think it shows a lack of imagination. But as an advisor tells someone over the phone to ‘shove it up your arse’, it actually has the effect of jarring me right back into the horror of the imagined act. Because what’s happening is, I’m trying not to think about it, but having to think about it at the same time.

00.16 We’ve got a special effects advisor – of course – I didn’t even think of this. I’ve been seeing this whole story as a pornographic extension of the Grimm’s Fairytales I read as a child – and there was some pretty bloody weird stuff in there, let me tell you.

00.17 Blondie and colleagues are watching the news as it breaks at work. There’s a brilliant little montage showing people absorbed but ultimately involved in their own lives. This is so perfect, and entirely what happens in extreme situations. The world is always watching, but never fully stops and stares.

00.18 The woman from the news crew is sending photos of parts of her body in exchange for insider info on the case. A nice touch again – a metaphor about how we have our own trades, our own demands, our own ransoms. Or maybe it isn’t that at all. I’m getting a bit tired and also dizzy from writing so fast.

00.18 Ace little dig at The Guardian and a) their love of live blogging, and b) the way they’d run this story: ‘the cultural significance of a pig’. Ha. God, I love The Guardian. Never change.

00.19 Vox pops of people in the street on the news ‘it’s disgusting’, ‘revolting’. I like the way that Brooker is building up this idea of people themselves being utterly revolting,  and we as the viewers are too. Because deep down, do we want this to happen? Why are we still watching? Why am I still sitting here, watching a TV programme where there’s a chance an actor might be pretending to have sex with a pig within the hour.

‘Would they use a female pig?’ Blondie asks, and then there’s a discussion about Lars Von Trier. I like this, again – it’s showing how the initial disgust has been filtered down: how, no matter how ‘connected’ we all are, all the time, we are ultimately disconnected, emotionally. What a load of wank. It made sense when I wrote it. Maybe The Guardian will give me a job?

00.23 Techie girl has managed to trace a possible lead, using a lot of technological speak that I miraculously followed. The aerial shot of the campus looks a lot like my uni.