It was with a new interest that I spotted ‘Peter Jones: How We Made Our Millions’ on the TV schedule last night. Usually, this would be the kind of programme I wouldn’t touch with the proverbial barge pole, but since I’ve been starting to set the tiniest of all small businesses – my jewellery company – I’m suddenly an avid viewer of all this business malarkey. ‘The Apprentice’ and ‘Dragons Den’ now get my undivided attention (rare – I’m usually drawing or texting or daydreaming when I watch TV). The continuity announcer intoned something about lingerie and smoothies, which led me to the conclusion that this was either a program about odd but harmless fetishes, or it was going to be that ‘woman with the terrible hair extensions’ who founded Ultimo (Michelle Mone), and ‘that chap from Innocent’ (Richard Reed). I was bang on the money, so to speak. Especially about the terrible hair extensions.

I watched the first ten minutes in delight. I knew from their amusing bottles that Innocent weren’t going to be the standard company, and I was overjoyed to see something that appealed entirely to me, with my crushing fear of authority and dislike of conventional working environments. Everything about Innocent sent me into paroxysms of happiness: the spinning wheel used to help them make decisions on smoothie flavours, their homely communal areas, their t shirts and beards and smiles. Peter Jones commented frequently on how out of place he felt, and seemed faintly appalled at the working environment. A particular focus of his ire was a sort of woven basket chair that hung by Richard Reed’s desk, designed to make it easy for employees to talk to each other.

I know I’ll be biased here, because Innocent is exactly the kind of company I’d love to work for one day, or I’d at least like to adopt some of Reed’s Messiah-like charisma and management style. But Jones seemed to have decided prior to filming exactly what his angle was going to be, and he was determined to lead the programme with that in mind, instead of being open to possibilities. It seemed he’d gone for this:

Innocent and Ultimo, two ostensibly similar companies in terms of success, including a brush with bankruptcy for both, and with each represented by a figurehead who will be the main subject of the documentary. The similarities end here: Reed, a Cambridge graduate, has formed a company based on ‘hippie’ values. Why, then, did they ‘sell out’ and allow Coca Cola to buy a portion of the company? Can they really all turf up in t shirts and give huge amounts of money to charity? Mone, conversely, came from incredibly humble beginnings, has worked hard for her success, and as Scotland’s first billionaire, is an exceptionally influential businesswoman. Does that mean she doesn’t suffer any insecurities?

And that was how he was determined to keep it. I found this to be unbelievably reductive, and blinkered him from pursuing the interesting insights thrown up as he talked to his subjects. I’ll expand: despite graduating from Cambridge, Reed was in no way the ‘privileged posho’ Jones seemed to want him to be. They included a brief section where Reed explained how he’d grown up in Huddersfield, that his parents had worked hard to educate him, and that he’d exited a stint in a dog biscuit factory as the ‘brush’ to start a lawn mowing company at the age of 15. Part of the programme was to take the entrepreneurs back to a place which had formed a seminal part of their upbringing. Jones elected to take Mone back to her tiny house and run down school, and yet took Reed to Cambridge, overlooking the opportunity to swipe him back to the dog biscuit factory that formed an important part of his business life.

The programme progressed. Away we went to Scotland, and to Ultimo HQ. Michelle Mone, all tight jeans, peroxide and unsuitable eye make up, introduced Jones to the building, explaining how it was shaped like a breast. This did nothing to assuage my feeling that Mone  veered very much to the ‘tacky’ side of the taste spectrum. Like I said, I’m writing this as a middle class, privately educated, largely pretentious 23 year old. I’m enthusiastic about new management styles passed down from innovative American companies like Google. I have ridiculously strong aesthetic beliefs. I apologise for not being able to look at this objectively, and pulling Jones up for exactly the same. I actually admired Michelle Mone on her recent stint on Sleb Masterchef, and genuinely liked the woman – this show changed my opinion irrevocably.

Mone took Jones up to meet her staff, who were entirely mute, just nodding when asked questions. The desks were freakishly tidy. Her PA looked tired and put upon but still enthusiastic. She waved Jones into her ginormous office (Reed had none, instead working in a corner of the open plan office, to encourage ease of communication with other staff). She showed off the wallpaper made of her press clippings. She explained she’d all but die for her company. Fine – you can’t argue with her dedication, only her taste. Excuse me for a brief foray into vacuity, but I simply cannot understand how a woman worth that much appears to have purchased the cheapest hair extensions known to man. I can’t stop looking at the ratty things. 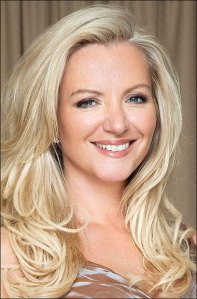 Anyway. Breathe. On the programme went, showing Reed with schoolchildren, tossing fruit into a sheet, on the beach with his friends looking serene, eating on a picnic bench with the serfs in the middle of the canteen. Mone was pictured lounging on a…well, a lounger, cocktail in hand, in some glamorous destination. Jones took Mone to a restaurant and pressed her to talk about the death of her brother when she was young, and revisited the house she grew up in, where her neighbour had kept all her clippings (save yourself the effort, love – Michelle could provide you with some lovely wallpaper of the same thing).

As we reached the vital last quarter of an hour, Mone was shown getting emotional, while Jones started a line of questioning with Reed that I found to be the least palatable thing in the whole programme. Jones kept trying to make him admit he was ‘in it for the money’. I’m not sure I’ll be able to form cohesive sentences here, but what on earth was the point in asking that? Firstly, Jones seemed to be imply that the company was selling out by making money, and yet Reed explained that they gave huge portions of it away, had started plenty of charitable initiatives, as well as events like ‘Fruitstock’ which they mounted to ‘reward their customers’. Reed never claimed not to be a good businessman, and I can’t see how them turning a profit makes him a bad person?! It was a limp line of questioning, with Jones attempting to catch him out.

Jones summed up by saying something along the lines of how he was ‘relieved’ to have made Reed admit he was ‘in it for the money’. He then said what a fantastic time he’d had with Mone, and how she was a real and vulnerable person underneath the tough business exterior, etc etc. Not a word was said about Mone’s charitable initiatives, if there were any. I’d have really liked to see this programme done differently  – examining the similarities between the companies, or Jones taking the same tough line of questioning with Mone as he did with Reed. After all, if he was going to push Reed about the financial viability of his company, couldn’t he have questioned Mone on her altruistic side, if such a side existed?

Ultimately, it was a frustrating thing to watch. Questioning Mone’s PA in front of her and national TV cameras was hardly going to yield the truth about working there. All I can say is, I know which one I’d rather be working for. And in case you’re still in the dark, it wouldn’t be the breast shaped building.

2 thoughts on “How We Made Our Millions”